What is FTM Transmasculine and NON BINARY Chest Masculinization (Top Surgery)?
FTM chest masculinization, otherwise known as ‘top surgery’, is a process of reducing the breast tissue surgically and with liposuction to give a more masculine and contoured chest appearance. There are various techniques that can be used to perform the surgery based on your chest mass and particular anatomy

What To Expect During FTM Top Surgery

The procedure is performed in the operating room under general anesthesia. First, a small incision is made under each breast. The excess breast tissue is removed and the existing breast skin reduced to give a defining contour to the chest. The nipple areolar complexes are surgically removed and then grafted onto the chest. This double incision top surgery is typically an outpatient surgery that lasts 3-4 hours. 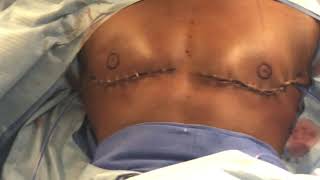 What To Expect During Recovery From FTM Top Surgery

Full recovery from chest masculinization varies between individuals, so it’s important to follow Dr. Del Corral’s advice, but usually you will be back to normal within six weeks. If you need pain relief, you can take over-the-counter painkillers such as Tylenol or ibuprofen. Likely you will wear a compression binder for 4-6 weeks post operatively.

What is FTM Transmasculine and NON BINARY Body Contouring?

Transmasculine body contouring typically consists of liposuction, abdominoplasty (tummy tuck) and brachioplasty (arm lift) to achieve a more masculine appearance. In some cases we will add a butt lift fat grafting procedure for firm, rounded buttocks if desired. The overall idea is to remove excess skin and subcutaneous fat tissue for a more muscular, masculine appearance in the arms, chest, abdomen and hips.

Liposuction
The liposuction technique is performed by marking the skin to indicate the precise area from which the fat will be removed. Next, a large amount of very dilute anesthetic solution is injected into the body site to numb and swell the fatty area (tumescent technique). Then a thin tube-like instrument called an ultrasonic probe is inserted beneath the skin through a small incision. The probe is maneuvered in a crisscross pattern while sound waves generate negative pressure, causing the fat cells to implode, or collapse, and liquefy. The liquefied fat and anesthetic fluid are removed using gentle suction. With the proper technique a specific area of the body can be contoured to obtain the desired shape and muscularity.

Tummy Tuck
An abdominoplasty (or tummy tuck) procedure is used to remove excess abdominal fat tissue as well as tighten potentially loose deep tissue to give a more flat, firm appearance. An incision is made along the lower abdominal area beneath the waistline and excess tissue removed. The abdominal fascia (deep strength layer beneath the skin) is then tightened to give a flatter appearance. The procedure is performed under general anesthesia and usually the patient will go home the same day or a single overnight stay in the hospital.

Arm Lift Surgery
The arm lift surgery is simply making an elipse incision on the underside of the arms to remove excess tissue. The incisions are placed such that the scars will remain hidden when the arms are at rest and not visible from behind. The excess skin is removed and the arm skin tightened. This is performed under general anesthesia and done as an outpatient procedure. Typically the arms will be wrapped with ACE wraps for 1-2 weeks to prevent post-operative swelling.

What Is Metoidioplasty?
Metoidioplasty is one of the most popular surgical techniques for creating neophallus in female trans patients. The main goal of metoidioplasty is to give the patient “male-looking genitalia” and the possibility to void in a standing position. This technique does not allow for penetrative intercourse.

What To Expect During Metoidioplasty
In this type of procedure, the hormonally enlarged clitoris is used to create a small neophallus. The urethra is lengthened by the use of local tissue (Labia Minora) and buccal mucosa grafts. The scrotum is created from the labia majora with the insertion of two testicular prostheses.

How To Prepare For Metoidioplasty
Before Surgery, patients are advised to use dihydrotestosterone gel and a vacuum erection pump twice daily for a period of 3 months before surgery, for additional clitoral enlargement.

This one stage procedure includes the removal of internal female genitalia, comprising hysterectomy, adnexectomy and vaginectomy, the creation of a neophallus from the clitoris, and the reconstruction of the urethra and scrotum. In this operation, the patient is able to a penis of 1 -3.5 inches (Micro-phallus). This is not enough for penetrative intercourse but appears are able to maintain good sensation in the microphallus as well as erections.. This operation has several advantages for the patient including lower cost, lower complications, decrease number of operations than phalloplasty procedures.

One advantage is that patients after metoidioplasty can undergo a phalloplasty as the urethra has already been lengthen during the metoidioplasty procedure.

The radial forearm free flap is the most commonly used technique in contemporary phalloplasty. The medial and lateral antebrachial cutaneous nerves are generally preserved and coapted with the ilioinguinal nerve and dorsal nerve of the penis/clitoris or the deep pudendal nerve, thereby allowing for erogenous and tactile sensation. The clitoris is reduced and buried under the pubis to assist with erogenous sensation.

Want to watch a Radial Forearm Phalloplasty with Urethral Lengthening in High speed? 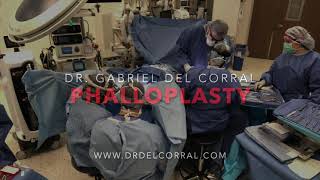 Anterolateral Flap Reconstruction ALT Flap
The anterolateral thigh (ALT) flap has become the secondary flaps used by Dr Del Corral for the creation of a phallus. It is less commonly used than a RFFF in the United States due to the amount of subcutaneous thickness present In the thigh region. Dr. Del Corral prefers to add tissue expanders in the thigh as the first step to “Stretch the skin” prior to this surgery. The first surgery usually takes 1-2 hrs for the placement of the expanders.

Who is a candidate for this procedure ?